His wife left him for the fear of contracting Leprosy from him: Javaid’s story

Javaid was leading a happy life with his wife and two children. He had a job as a Foreman in a Garment Factory and was quite content with his life. One fine day he noticed white patches all over his body, and his hands and legs started getting numb. He went to many homeopathic and allopathic doctors to get some relief, but there was no change. In fact his condition was deteriorating; his fingers started bending and wounds were developing due to the loss of sensation in his hands and legs. He used to not feel anything when he used to hurt himself. He also tried certain religious prayers for healing, but he was soon losing hope.

He lost his job, as he could not perform any longer. This led to fights in the house. His children’s education got affected which made him very worried. Even though he was spending a lot of money on his treatment, there was no sign of relief from anywhere. He was getting from bad to worse.

Javaid used to confide in one friend, whom he shared regarding his sickness with the hope for some cure. His friend used to console him and tell him not to worry. His friend took him to MALC New Karachi Centre where he was diagnosed with Leprosy and his treatment began.  He assured him that he would be cured. On getting to know this, Javed felt there was some hope as his ailment was diagnosed but when he broke the news to his wife, she fought with him and left the house with his children.  Being a family oriented person, he decided to bring back his wife and children. When he went to her, she asked for a divorce and said “I cannot stay with you because of your contagious disease and the children will contract it too.” Javaid was dejected on hearing this, but he did not lose hope and tried his best to convince his wife to come back. Even after all his efforts, it didn’t change her mind.

Meanwhile, Javaid continued his treatment and was getting better. His wounds were healing, but the thought of not having his family around him used to depress him. When the doctor got to know the reason for his gloomy face, he counselled his wife but she wasn’t convinced and was adamant that she and the children will contract the disease. Javaid did not lose hope and went many times with the doctor. Finally she agreed to come back with the children. He found a better job than his previous one and the children were readmitted in school.   He has now completely recovered and leading a happy life, which he had once lost. 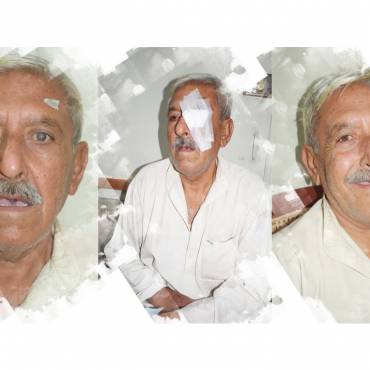 From birth, her vision was clouded: Asima’s story